"The Angel Of The Nauld" - Arria 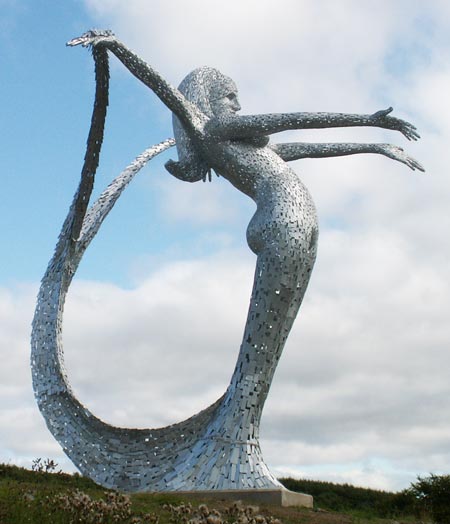 Nicknamed by one publication the "Angel of the Nauld" as a tongue-in-cheek reference to the "Angel of the North" at Gateshead, this steel sculpture was created by award winning public artist Andy Scott, in his Maryhill studio in Glasgow, and galvanised to protect it against the elements by Cumbernauld Company "Highland Colour Coaters." Now officially named "Arria", the 10 metre high finished "Angel of the Nauld" sculpture sits on its site overlooking the North bound carriageway of the M80 north of Auchenkilns.

The "Angel Of The Nauld" takes the form of a female figure, with two large swooping arcs from the upraised palms of her hands to the hem of her dress. The idea of the arcs comes from the Gaelic name for Cumbernauld, “comar nan allt”, which translates as “the meeting of the waters”. 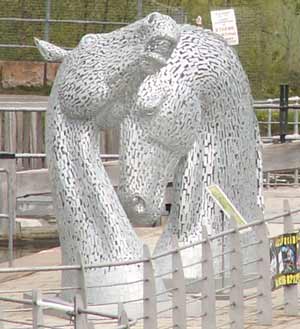 Artist Andy Scott has received over 70 public comissions worldwide, with many of his distinctively styled sculptures displayed locally, such as the Water Kelpies (shown on the left) at the Falkirk Wheel, the Heavy Horse beside the M8 motorway in Glasgow, and The Phoenix at Easterhouse.

Many of the comissions Andy receives come from local community groups and he is careful to involve them in these projects and draw inspiration from their involvement.

Other items have gone further afield and you can find Andy's work on public display in places as far apart as Belfast and Brisbane.

The Australians in particular seem to have developed a taste for his creations.

Many of Andy's works have become very popular landmarks for their communities with the local population developing a real sense of ownership and affection for the sculptures. As yet however, no-one has taken him up on his ambition to create a sculpture of Kenny Dalgleish or Denis Law to stand outside Hampden Park.

"Cumbernauld has always had its detractors and, much like Dundee 20 years ago, it is fashionable to decry the town."

"However, I believe Cumbernauld has a lot to offer. Things have changed for the better over the past few years and I hope the sculpture will represent the aspiration of Cumbernauld as intended by the original planners and architects. "

"I intend the sculpture to be a personification of yesteryear's modernity, a paean to the confidence of the town and a reminder that Cumbernauld was once celebrated as an ideal of modern urban development."

At a cost of £250,000 "The Angel Of The Nauld" has attracted criticism on two counts. Many people felt the money could have been better spent in other ways, and some people felt the site chosen for the sculpture was wrong. On hearing that artist Andy Scott favoured locating the sculpture overlooking the M80, rather than at the Cumbernauld Centre, local councillors Alan O'Brien and William Homer resigned from CCCL in protest. Mr O'Brien is quoted as saying "We found it pretty insulting that somebody could just come in and decide that our town centre wasn't good enough for his sculpture."

In response, councillor Gerry McElroy said: "There were never any plans to site this structure in the town centre of Cumbernauld. This site – which looks down on the main road connecting Cumbernauld to the rest of Scotland – was chosen because it will give the maximum number of people in the town and across the country the ability to see this iconic structure."

There is much to be said for councillor McElroy's view and I think there is no doubt that with the M80 location, this extremely visible landmark will raise the profile of Cumbernauld. In my opinion, CCCL have got it right and I think Arria "the Angel of the Nauld" is a lot easier on the eye than the rust covered Angel of The North, which certainly put Gateshead on the map.

Geoff Crowley, managing director of Highland Colour Coaters, also has forthright views on the topic. "It's time to put petty differences aside and support something positive. For too long now, Cumbernauld has been held up as an example of poor architecture and town planning, and we feel that CCCL should be applauded for trying to address this.

"As a leading employer in the area, we believe that we have a responsibility to contribute to the re-birth of the town and that's why we decided to make this gesture of offering to galvanize the sculpture free of charge.

"Having worked closely with him (Andy) in the past, we felt it was important to show our support for what he, and CCCL, is trying to achieve, which is improve the image of Cumbernauld." 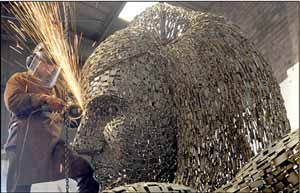 The first photographs of the work in progress were released in April 2010 and Andy can be seen to the left, working on the head of the sculpture. The female's hairstyle is reminiscent of the 1960's as an allegorical reference to the new town's major development in that decade. The artist commented "I want to create the idea of moving from the past and reaching forward to the future to create a distinctive new image for the town and I'm confident I have achieved that in this artwork."

There were factors other than artistic design to be considered. Because the sculpture is essentially hollow, the question of structural strength and stability had to be addressed. Glasgow structural engineering consultants, Evolve, were appointed to advise on structural bracing and foundation requirements.

Part of the Inscription round the base of Arria.

Other branches of the arts have not been ignored, with Scottish poet Jim Carruth being comissioned to write some verse which is inscribed on the finished sculpture. In August 2010, the finished poem was published.

The poem is inscribed in a 1960's style font around the base of the sculpture, so that visitors need to walk around it to read it.

The first sounds spoken
from the spring’s core
are of a new beginning
of people and place
a poetry that bubbles
and gargles to the surface
to leave this watershed
flow east and west
in a rush of words
that tumble and fall
to join the conversations
of two great rivers
a voice calling out
I belong I belong
adding to the language
of sea and ocean. 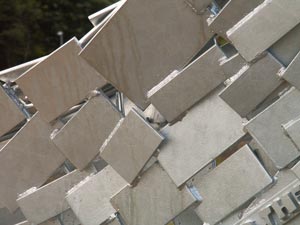 In preparation for the siting and unveiling of the sculpture, CCCL launched a competition which ran throughout July 2010, for Cumbernauld residents to suggest a name for the sculpture. The judges ultimately stuck with the historical Antonine connection and picked "Arria" as the winner. Not only was the mother of the Roman Emeror Antoninus named Arria Fadilla, Arria was also the name of his half-sister. The name was chosen in time for the erection of the sculpture on 24th August 2010.

Cumbernauld once boasted its own artist in residence, Brian Miller. In the days of the Cumbernauld Development Corporation, Brian Miller was responsible for the appearance of brightly coloured murals and all sorts of concrete sculptures over the length and breadth of the town. "The Angel of the Nauld", is surely a piece of art that Brian Miller would be proud to see in Cumbernauld.

« Return to Cumbernauld Landmarks from Angel Of The Nauld