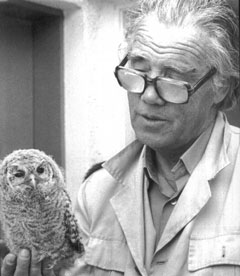 David Stephen (photograph from
his book "Living With Wildlife")

Set in almost 700 acres of countryside which had been a run down farm on the outskirts of the town, Palacerigg Country Park can be described as the jewel in Cumbernauld's crown. It was opened by Cumbernauld Burgh Council in 1974 under the guidance of the first Warden, local naturalist David Stephen.

David Steven was an internationally recognised self taught naturalist, writer, photographer and Journalist, writing columns for the Daily Record and The Scotsman. He was passionate about wildlife and was violently opposed to hunting, trapping and factory farming. Sadly his books are all out of print now but if you look hard enough, you can buy them second hand.

Harry Reid, editor of the Glasgow Herald between 1997 and 2000, worked closely with David Stephen and had this to say about his books.

"They are valuable not just for his wonderful empathy with animals but also for their superb descriptions of the Scottish landscape."

Originally home to a huge variety of different animal species, financial cutbacks imposed since Cumbernauld and Kilsyth District Council's absorption into North Lanarkshire Council, have meant the loss of the range of species which used to be on view. Palacerigg today specialises in rare breeds and conservation of endangered species. Personally, I regret that species such as the wolves, wildcats and birds of prey are no longer featured at Palacerigg, but there are still plenty of animals to keep young children happy.

When Palacerigg was first established, hundreds of thousands of native Scottish trees and shrubs were planted, creating wooded areas and pasture for animals such as sheep, goats and deer. The wilder areas have proved to be a haven for the wild animals which have taken up residence there. If you are lucky, you may come across badgers, owls, kestrels and sparrowhawks, as well as the animals you are more likely to come across such as squirrels, foxes, hares and a multitude of common birds.

As the wooded areas started to mature, the team at Palacerigg wanted to demonstrate traditional woodland crafts. This project was kicked off in 1998 with the building of the two millennium longhouses. These houses were constructed mainly of timber and were built using ancient techniques with timber harvested from the Palacerigg woods. The Palacerigg Visitor Centre has a display showing various stages of the building project. The longhouses are now used to demonstrate crafts such as charcoal burning, willow sculpture and basket weaving which are based upon the use of the natural resources to be found in woodlands.

The pond which is the first thing you see as you walk from the car park is an addition that was made to the original park layout. The quacking, splashing and hissing noises you hear give you a clue as to the identity of the inhabitants. If you expected ducks, you will not be disappointed as the pond is chock full of them. There are also some Australian black swans. This has the dual fascinations for young children, of water and birds, and you can be sure that if you have youngsters in tow, the walk over the bridge which crosses the pond will not be a hurried one.

Without straying too far from the car park, you can see guinea pigs, chickens, the peacock and peahen, tamworth pigs, sheep, goats, and Zeb-a-dee the zebu (a dwarf cow native to India and considered sacred by Indians of the Hindu religion). Although popular with youngsters all year round, Easter is a particularly good time for young children to visit Palacerigg, with chicks, lambs and bunnies with which the children can interact, all on show.

The birds now on display are biased pretty heavily towards chickens, but not your common farmyard birds. The bird species on display are part of a conservation project, and include breeds such as the "Scots Dumpy", reputedly one of the oldest breeds in the UK (classified as "vulnerable" by the Rare Breeds Survival Trust), the ornamental Sebright bantam shown above left (classified as "endangered") and the "Marsh Daisy" (also classified as "endangered"). You can also see the dazzling array of colours displayed by the peacock shown above right, as he outdoes the peahen with all his finery.

One of the more recent additions to the park has been the Tree Top Walkway, as shown at the sides. This unusual feature allows a birds eye view of what goes on at tree top level. There are several observation platforms along its length to allow those looking for a more leisurely inspection to do so without blocking the single file walkway. The timber and wire mesh construction is perfectly safe, but if you are scared of heights, I'd give it a miss.

And of course we cannot forget about the golf course. The popular 18 hole course was designed in the 1970's by English golfer Henry Cotton who won the open three times in the 1930's and 1940's. It is a municipal course owned by North Lanarkshire Council, and there is also a private club and clubhouse attached.

For enthusiastic walkers, there are miles of footpaths and bridle paths to allow you to commune with nature. The paths can a bit muddy so sensible shoes are the order of the day. Be careful not to tread in horse dung on the paths and beware of stray golf balls when your route is adjacent to the golf course.