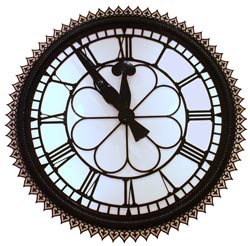 The St Enoch Clock is a world famous Cumbernauld landmark which can be seen in the town centre. It started life in one of the 4 mainline railway stations which operated in Glasgow from the late 19th to mid 20th Century - St Enoch Station.

St Enoch was one of the two main city-centre stations with a Cumbernauld connection which were closed in the 1960's, as part of the infamous Dr. Beeching's massive railway closure program. The other station which closed was Buchanan St., from where the trains which served Cumbernauld ran.

For me as a child, St Enoch was the most exciting railway station to be in. It was where you boarded the trains which ran to the holiday towns on the Ayrshire coast, and in the days before cheap air travel to foreign countries, a trip to St Enoch brought on the same feelings of excitement which the children of today get when visiting airports.

It was a simpler age with no electronic games to entertain the kids. The sole amusement I can recall was a machine which would let you painstakingly emboss your name on a thin metal strip about 10mm wide. You got about 10 letters for an old penny, which made it a cast iron certainty that you'd need to cough up at least another penny to finish your name. I don't recollect it being of any use once you'd paid your money and manipulated the dial through all the letters to end up the proud owner of a small metal strip bearing your name. However, it was the process of creating rather than owning the finished article which was the exciting part.

Photograph by James Valentine of Dundee.

St Enoch Station was built in the 1870's and was modeled on London St. Pancras station, with a huge arched glass and iron roof. It was in part of this roof that the St Enoch Clock had its home, as shown in the photograph below. This was the first mainline station to be built in Glasgow and until the construction of Central Station, it was the largest in the city and the first major public building in Glasgow to be lit by electric lighting.

The Original St Enoch Clock Location In The Station Roof
(Image from photobucket.com)

When the station closed in 1966, the platform area was initially leveled and used for car parking. Eventually, the station building was demolished, amidst much protest about architectural vandalism. Many people were of the opinion that the roof was a prime example of Victorian architecture and should be preserved. However, in 1976, the glass roof panels were first smashed for "safety reasons" and ultimately the whole building was demolished the following year to make way for the St Enoch shopping centre which opened in 1988.

The rubble from the demolition was used to help fill in Queens Dock, which had also passed its sell by date, and today, the buildings of the SSEC are built upon the rubble of St Enoch railway station. The only piece of the station which is known to have survived is the St. Enoch Clock. This iconic timepiece was presented to Cumbernauld in 1977, as the new town celebrated its 21st birthday. It was hung in the town centre at the foot of the stairway which joined the upper shopping level of town centre phase 1 to the walkway leading to the Woolco store. That same year, Queen Elizabeth II was celebrating her Silver Jubilee, and she it was who unveiled a commemorative plaque documenting the gift of the St Enoch Clock from the people of Glasgow to the people of Cumbernauld.

There has been much public criticism of the location chosen for the St Enoch Clock at the time of the opening of the Antonine Centre, as the clock is now out of the way in one of the less frequented corridors linking Phase 1 with the Antonine Centre. In actual fact, the clock remains in almost the same location as it was originally, albeit it now faces a direction which is at right angles to it's original one. It has to be said that the clock installation was more imaginatively laid out originally with a much more appealing mosaic tile background and featuring a pendulum and an audible tick-tock.

There has also been frequent criticism about the accuracy of the clock. Since the opening of the Antonine Centre, it has been stopped for much of the time. This has prompted its appearance on a web site dedicated to finding and fixing all of the stopped clocks in the UK. Although I have noticed the clock set to a several different times when I have passed, I have never yet seen it at the correct time, so here's hoping all the adverse comments have been taken on board and something is done about it soon. Its a shame we don't take more care of our heritage.

« Return to Local Landmarks from the St Enoch Clock