I was first introduced to the joys of Cumbernauld as an 11 year old. Moving to Cumbernauld from the top floor of a Glasgow tenement, where the rubbish bins or "midgies" as they were more commonly known were 3 floors away, to a terraced house with the bin just outside the front door, held the promise of an easier life. Of course this meant you could no longer "hing oot the windae" and chat with the neighbours, or watch "midgie rakers" rifling through other peoples rubbish, nor could you enjoy listening to the regular serenades from characters who would stand in the tenement back courts and belt out some popular songs in the hope that some kind souls listening would throw them down a few pennies.

Moving to Cumbernauld in January 1964, I remember that cold winter vividly. The snow seemed to have lain on the ground almost constantly from the previous November. Replenishing the coal pail to make sure there was sufficient fuel to keep the fire burning had also involved a trip down 3 flights of stairs to the coal bunker. In the new house, the coal bunker, like the bin, was just outside the front door. This really did look like being a much easier life!

There was just one problem. Brand new house = brand new coal bunker = no coal in the bunker. Apparently the coal delivery lorry was not due to come round for another week. We'd just missed him.

Full central heating which is commonplace today was a distant dream then for most people, and the main source of heat was an open coal fire. Still, the fires which the CDC had specified to be fitted in these new houses did have a back boiler, which not only provided hot water, but also heated a radiator in the hall and the two upstairs bedrooms.This was a huge improvement. The house from which we had come boasted only a single open fire. 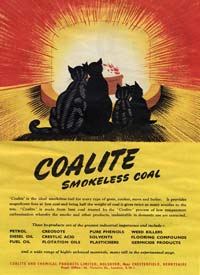 This brought us back to the issue of there being no coal. The short term solution apparently was to buy small paper sacks of coal from one of the shops in the "temporary shopping centre." This was not the coal we had burnt in Glasgow, but smokeless fuel (known to generations of iron and steel workers as coke or charcoal), with tradenames such as "Coalite" and "Rexco."

The new town was a smokeless zone, as were most new housing estates built at that time. The town planners had determined to do away with the smogs which had blighted the atmosphere of large towns and cities, contributing to breathing difficulties and premature deaths for so many people. I still remember some real pea-soupers as a young child in Glasgow, and my mother's instructions ringing in my ears to "make sure you keep your face covered with your scarf." This was a crude and probably fairly ineffective attempt to filter out the smog.

So here we were. My father being at work, it fell to my mother and me to struggle back from the shopping centre carrying this paper sack of smokeless fuel, over a temporary bridge constructed with scaffolding poles and battens, and along pathways which someone had laboriously cleared of snow the old fashioned way - with a shovel. My mother was also juggling my younger sister and a bag full of shopping, so inevitably I ended up bearing most of the weight of the fuel sack.

"What a cold miserable place this is!" I thought. Carrying the coal pail up three flights of stairs at our previous house suddenly took on a nostalgic rosy glow in my memory. A deep sense of resentment welled up inside me. "Why had my parents brought me to this freezing labour camp of a place?" "Why was I being punished?"

A man walking along the path behind us obviously took pity on us and when he caught up with us, he whisked the sack from my hands and carried it the rest of the way home. "This can't be so bad after all" I thought. "They're obviously a really friendly bunch of people here. Maybe moving to Cumbernauld was a good idea after all."

My conversion to seeing the positive side of Cumbernauld lasted almost a day. The first day at school was the thing which changed my mind. About a year before moving to Cumbernauld, we had moved to a different part of Glasgow, and the headmaster of the school I attended there was full of praise for how far I was ahead of my classmates. However, it became apparent the first day I attended Kildrum Primary, that the Glasgow school I had just left was actually trailing behind other primary schools and now instead of being ahead, I was about 4 months behind my new Cumbernauld classmates.

I arrived home at the end of that first day with a mountain of extra homework and as the realisation of how many hours I'd be tied up doing this struck home, the lower lip definitely quivered a bit and again I thought "I hate this place."

My memory is a bit hazy as to how long it took me to stop vacillating between the two opposite viewpoints and come down firmly on the side of Cumbernauld being a good place to live. I do remember that by that summer, as we left primary school and prepared to start secondary school in the autumn, I was completely hooked on Cumbernauld as a place to live. To someone coming from Glasgow and whose only regular experience of green open spaces was visits to the Glasgow parks, Cumbernauld was a revelation. It was then and in many ways still is, a taste of the countryside on your own doorstep.